TALES OF A TRAVELING STEAMER TRUNK

If your family heirloom could talk, what stories would it tell? The steamer travel trunk I inherited has 120 years of travel tales to share. My 2x great-grandparents, Clinton Delos Orcutt, and Anna Dorcas Orcutt, nee Dutton,  purchased the trunk about 1895 for my great-grandmother, Edith Marion Orcutt.  Edith, who married Alfred James Beaton in 1899,  loaned the trunk to her only daughter,  Anna Jane (Beaton) Hyde for various trips.  The trunk eventually passed to my mother, Jean (Hyde) Hopp Eichorn.The Omaha steamer trunk journeyed across the United States, and back and forth over the Atlantic Ocean. Wouldn’t it be fascinating if the trunk held a written log of all the trips it made?

STORIES MY MOTHER TOLD ME ABOUT THE TRUNK

Growing up  in Omaha Nebraska Jean Hyde used to visit her grandmother, Edith (Orcutt) Beaton, affectionately called“Dee Dee,” once a week after school. Jean quickly walked the 10-minutes from Duchesne Academy of the Sacred Heart to Dee Dee’s house at 502 North 40th Street.  During recess, she and her friends plotted how they could sneak off the grounds so they could play in her grandmother’s attic. Although Mother always referred to it as “the attic”, it was really the spacious third-floor ballroom of the turn of the 20th century home, now a historic landmark in Omaha[1]

As my mother and her friends scampered up the stairs to the third floor, they anticipated digging into the large steamer trunk filled with dress-up clothes from a bygone era. There were elegant dresses, once worn by great-aunts, ostrich feather boas, long gloves, plumed hats, and fancy heeled shoes. The young girls spent many hours prancing about in their finery. 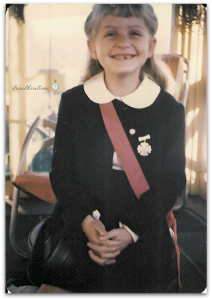 MY MEMORIES OF THE TRAVEL TRUNK

An attic stuffed with treasures is a child’s fantasy.  Although my family didn’t have an attic, nor a ballroom,  our house had a large basement where my siblings and I played on freezing winter days. Fueled by our imaginations, Western TV shows, and Laura Ingalls Wilder books, my sister, Karen, and I pretended we were pioneers on the wild western frontier. We supplied our “cabin” with necessary articles discovered in the basement storage cupboards. There were also two steamer trunks shoved against the wall.  Rectangular, massive, and seemingly immovable, we were certain they contained treasures we needed.  We eyed the largest and oldest. The large lock hung loosely, the key lost. Horseshoe shaped metal hinges and long leather straps adorned each side. A small tin plate affixed to the top read, “Manufactured by Omaha Trunk Factory, Omaha, NE.”

We inched the heavy trunk away from the wall, unfastened the leather straps, and pried open the lid. I still remember the wonder as we peered inside.

Initially, the divided top section disappointed us. It contained old newspaper clippings, letters, and photographs; these things were not very interesting to an eight and nine-year old. We strained to lift the compartment out and found just what we needed. Stacks of baby blankets, clothes, and paraphernalia were perfect for dressing up our dolls. With our mother’s approval, we spent many happy hours combing through the trunk.

ORIGINS OF THE TRAVEL TRUNK

Edith Marion Orcutt, about 1896, Omaha, Nebraska. Copy of photo in possession of author.

“Mr. C.D. Orcutt and Miss Edith left yesterday for St. Louis, where Miss Edith will enter the Convent of Sacred Heart at Maryville.”[3]

“Miss Edith Orcutt left for St. Louis last evening, where she will continue her studies at the school of the Sisters of the Sacred Heart.”[4]

In 1901, Clinton Orcutt packed his bags for a four-month trip to Europe. He was wealthy, widowed and had two young, unmarried daughters who would benefit from a sojourn exploring the major cities abroad. Dee Dee and Alfred Beaton and their 4-year-old son, Orcutt Beaton, remained in Omaha. Anni Ri age- 20 and Jane Clare age- 17,accompanied their father on the extended trip. “The desire and curiosity to see and experience the Old World was fueled by popular novels and travel writings of American authors Nathanial Hawthorne, Mark Twain and others, who by writing and romanticizing their time abroad, excited and encouraged their readers in the United States to go and see Great Britain and Europe for themselves. Experiencing Europe firsthand was to become the “finishing” of American upper-middle-class youth before they got down to the business of real life; work and raising a family.”[5]

My grandmother saved  Clinton Orcutt’s travel album.  The photos weren’t dated, nor were all the locations noted. Using Chronicling America’s newspaper website, I found a couple of articles describing their departure in the summer of 1901.

“Mr. Clinton Orcutt, accompanied by his two daughters, Miss Anna Ri, and Miss Jennie, will sail June 8 for England, to be gone several months. Their tour will include England, Germany, Holland, Belgium, France, and Italy.”[6]

“C.D. Orcutt and his two daughters left Omaha last week for Europe. They sailed Saturday from Montreal and will travel on the continent for four months.”[7]

The pictures scanned from the photo album are a bit blurry.  I intend to re-scan them at a higher resolution in the future.. The travel album is also worthy of a separate blog.

Like her mother and her aunts, Anna Jane attended a Sacred Heart Academy. From elementary school through college, Anna Jane was a devoted student at Duchesne Sacred Heart Academy in Omaha, Nebraska. She sought a bit of excitement and change. In her Junior year, she chose to go with her best friend, Jean McGrath, to the Sacred Heart Academy in Manhattanville, New York. The Omaha Travel Trunk accompanied her. I know she had a grand time while she was there and recall how her sapphire blue eyes sparkled when she recounted  her adventures.

A SECOND TRIP TO EUROPE

Anna Janes’s favorite aunt, Jane Clare (Orcutt) Keeline, died in 1918 due to an internal hemorrhage from a tubal pregnancy. She left her only niece an inheritance that enabled Anna Jane to travel to Europe during the summer of 1929. She traveled as part of a group that departed June 29, 1929, at 12:00 noon from Cunard Pier, No. 56 in New York aboard the RMS Lancastria. 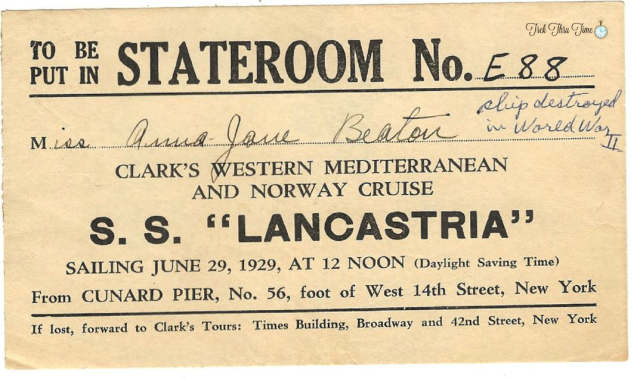 Anna Jane wrote her mother a letter from London that stated they had a smooth crossing. “Miss Beaton reported a very fine time on the boat with social and athletic activities at all hours of the day.”[8] The group traveled throughout Europe until the end of August 1929.

TRAVEL TRUNK MOVES TO COLORADO, ARIZONA, AND TEXAS AND THIRD TRIP TO EUROPE

After Anna Jane’s trip to Europe,the trunk  sat upstairs at Dee Dee’s collecting dust. It was here on the third floor where my mother and her friends opened the travel trunk and excitedly explored the contents.  After Dee Dee’s death in 1964 the trunk made another trip, this time to Platteville, Colorado where my parents lived.  My mother’s uncle, Orcutt Beaton, who continued to live in the Beaton home, shipped the trunk via railway to her. 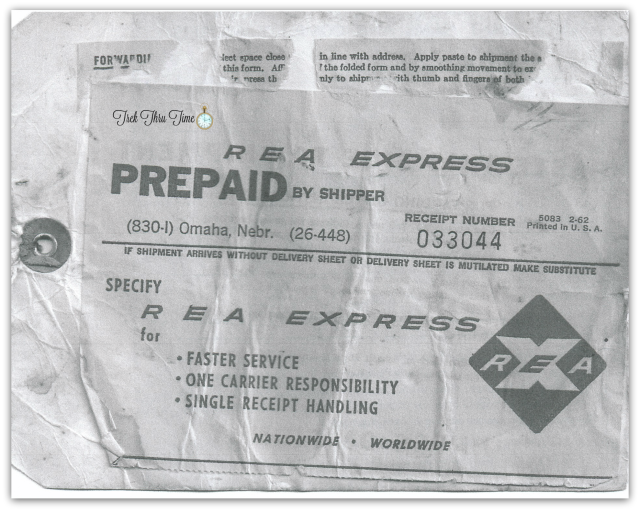 It stayed in Colorado for 30 years until my mother relocated to sunny Arizona in 1994. When I moved to El Paso, Texas in 1996, I asked Mother if I could have the steamer trunk. At the time I  didn’t know the entire background, but I knew I liked the trunk and its connection to my family . When my husband and I moved to Berlin, Germany in 2003, the trunk went with us and served as storage for letters and memorabilia. The Omaha Travel Trunk is now in climate controlled storage in Alexandria, VA protecting all of my original genealogy documents until my return in a couple of years.

Thanks to Jeanne Bryan Insalaco of Everyone Has a Story for suggesting doing posts on heirlooms and to Cathy Meder-Dempsey  of Opening Doors in Brick Walls for including a list of  Heirloom bloggers and their links.

True Lewis at Notes to Myself

Jeanne Bryan Insalaco at Everyone Has a Story

Linda Stufflebean at Empty Branches on the Family Tree.

Amy Johnson Crow’s 52 Ancestors in 52 Weeks theme for 2015 Week 24 was Heirlooms. Please visit her 52 Ancestors Challenge 2015: Week 24 Recap for the links to posts in the comments.

An interest in history and travel lends itself to a passion for genealogy. The more I research, the more I realize there is to discover. It is a never-ending puzzle.
View all posts by treeklimber →
This entry was posted in Heirlooms, My Family Ancestry and tagged Beaton, Heirlooms, Hyde, Orcutt. Bookmark the permalink.

12 Responses to The Traveling Trunk