A long forgotten sixty-year-old envelope lay safely tucked away in a large metal steamer trunk in my mother’s garage. As a child, I always thought the chest held treasures, now I know it does. The letter lay among stacks of old family correspondence and childhood memorabilia. I whooped with joy when I read the contents. It held the key to solving the mystery of my 2x great-grandmothers Swedish origins, the topic of my first family history blog. 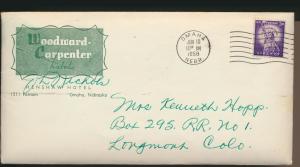 Mary Nelson Nichols’ past was shrouded by the veils of time. Spurred on by my mother’s fascination with her Swedish ancestry I tried to solve the mystery four years ago. My mother attempted to solve it almost sixty years ago.  A  lack of information and misinformation hindered my search. None of Mary’s American records indicated specifically where she came from in Sweden, a vital element when doing Swedish research. To trace Mary Nelson’s past, I needed to know the parish where she was born.

Mary Nelson/Maria Nilsdotter – photograph taken between 1875-1880. In possession of author.

A summary of the information I had about Mary Nelson Nichols before the discovery of the letter:

I was one step closer to finding Mary’s parish when I discovered the letter. After the birth of my brother in 1957, my mother, Jean HYDE Hopp, wrote to her great-uncle Johnnie to ask about their shared family history. She hoped that Johnnie, the last surviving child of Mary Nelson Nichols, could answer questions about both the Nelson and Nichols families. Jean’s half-Swedish grandmother, Mabel Nichols Hyde, died before Jean became interested in recording family stories.

In June 1958, Johnnie wrote a response. He supplied what little information he knew. Some of it was correct, some of it was wrong, and some of it was a mixture. Johnnie provided enough details for me to research and find  Mary’s two sisters, Anna and Christine.

“Mother had 2 sisters and Bro.[sic] named Anna, Christine, and Alex, all born in Ingeborg Sweden, dates unknown. Anna was married in Clinton Iowa in 1881 and raised 5 children, Carolyn, Albin, Roy, Carl, and Natalie. Anna died in Ft Worth Texas 1946 and was buried in Clinton Iowa. Albin died in 1912, buried Clinton, Iowa, and Roy died 1924, buried in Clinton. Natalie Webb lives in Fort Worth Texas, and Carl lives in Los Angeles. Anna’s married name was Nyberg. That’s all I can give you on the children. I don’t know if Christine or Alex ever married.”[i]

FILTERING OUT FACT FROM FICTION

The family story that Mary was born in southern Sweden and came from the town of Ingeborg must have originated with Johnnie. Nobody checked an atlas and google maps didn’t exist. “Ingeborg, Sweden” is not a place. Johnnie confused a place with a person’s name. Research later revealed that Ingeborg was one of Mary’s older sisters. On his mother’s 1931 death certificate, Johnnie provided a second incorrect place name, “Warwick, Sweden.”[ii] He spelled what he had heard pronounced by his mother, but it wasn’t close enough for me to discern the real place-name.

Fortunately, Johnnie remembered the correct married name for his Aunt Anna. If I could find a document for Anna that stated her birth place, I could find the parish for Mary and her siblings.

I quickly found Anna Nyberg and her family in census records.  Anna immigrated in April 1880 to Clinton, Iowa. Two months later in June, she married Swedish immigrant Karl Nyberg. Karl, who changed his name to Charles, worked as a carpenter until his early death in 1906. Anna and Charles had five children, just as Johnnie stated in his letter. He was wrong about some of the birth and death dates, a minor detail.

I hoped that Anna’s death certificate would note her birthplace in Sweden.  Anna’s youngest daughter, Natalie, who provided the information for the death certificate, included a crucial location. I eagerly scanned the Texas document and found on line # 11, BIRTHPLACE “Varmaland Sweeden.”[iii] The information narrowed the search, but it still wasn’t precise enough. 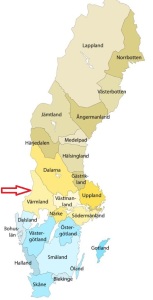 According to Family Search website in 1890, Värmland consisted of 92 parishes.[iv]

A parish, (socken) kept the records for all the members, (birth, marriages, and deaths). Every source I consulted stated that knowing my ancestor’s parish was vital to Swedish family research. I scoured every collateral record I could find for Anna’s children. Once again, one of Anna’s family members came to the rescue.  Her youngest son, Carl Walter, had a delayed birth certificate with a precise location: “Skallarbyn, Varmland, Sweden.”[v] 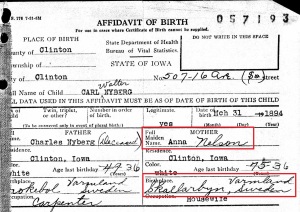 This was the information I needed to search for Mary, Anna, Christine, and Alex in Swedish parish records. Swedish archives are exceptional. However, they are written in Swedish, and the handwriting can be difficult to read.

LOCATING MARY IN THE SWEDISH ARCHIVES

Various members provided translations as well as current photographs of the area. Through the assistance of a researcher familiar with Swedish archives, I obtained the birth, marriage, death, and probate records for Mary and FIVE more generations. Solving Mary’s Mystery required a combination of sleuthing, research, Swedish genealogy Facebook groups plus DNA.

Johnnie gave me the married name for Anna Nelson –Nyberg- which made it easy to find her in American census records. Tracking down sister Christine proved to be more difficult. I didn’t know if she had married, and if so, what was her name? I searched Iowa census records for every Swedish “Christine” I could find; there were too many. I expanded my search to include DNA matches. Using shared DNA matches on ancestry.com, I found a family tree with Christine Nilsdotter. According to the Swedish household records, twenty-eight-year-old Christine emigrated in April 1872 to North America.[vi]

The single mother was accompanied by her 7-year old son, Karl Bryntesson. After their arrival on the east coast, the two headed west to Clinton, Iowa.

Two years after her arrival in Clinton, Christine gave birth to a second son, Elmer Oscar Nelson, born on January 2, 1874. It is through a descendant of Elmer Oscar Nelson that I made the DNA connection to Christine. On July 10, 1876, Christine married a 56-year-old Swedish widower Olaf Nilsson. On February 26, 1878, Christine gave birth to a daughter, Christine Rosalie Nelson.  Good fortune seemed to evade Christine because one year after her daughter’s birth, Olaf disappeared or died. The thirty-five-year-old widow raised her three children alone.

Christine’s eldest son Charles (Karl) lived with her throughout her lifetime and supported her. He worked as a pharmacist, at a lumberyard, and later a sash factory. After Christine’s death in 1912, Charles took in two Swedish boarders. He never married. In 1924 he moved to Moline, Illinois where he died two years later at age 60.

MARY’S MYSTERY – WHAT’S IN A NAME?

Swedish research requires a basic understanding of the patronymic naming system, which was common in Sweden up to the end of the nineteenth century. If the father’s name was Nils Persson, then his son’s name might be Per Nilsson (Per the son of Nils). Similarly, a daughter named Maria would be Maria Nilsdotter (Maria the daughter of Nils). A woman retained her own patronymic name when she married. I knew that Mary Nelson probably Americanized her name, as many immigrants did, for practical reasons. After locating Mary and her sisters in Swedish archives, I learned that Mary’s given name was Maria Nilsdotter. Although Mary’s two sisters, Anna and Christine kept the spelling of their Swedish first names in the United States, they changed their surname from Nilsdotter to Nelson/Nielson. 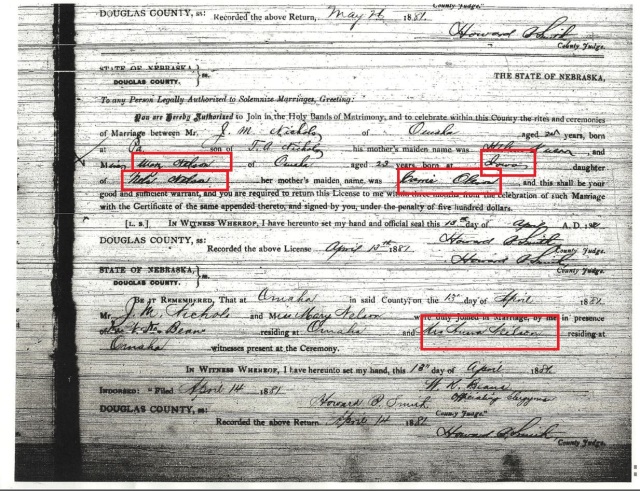 I assume Mary provided the information. In the case of her death certificate, Mary’s son Johnnie provided the names. They are noted as “Nelson” and “Christine.” For years I was chasing the wrong names. I should have been searching for Maria Nilsdotter with parents named Nils Persson and Karin Olsdotter. Name changes certainly do complicate research.

There is one more confusing name change. It involves Mary’s brother, Alex, whom  Johnnie referenced in his letter. According to Swedish archives,  Mary didn’t have a brother named Alex. She had two elder brothers, Anders and Nils, and one younger brother, Per, who immigrated to North America in April 1888.[viii] Because Johnnie supplied the name Alex and knowing that immigrants often change their names, I plugged in name variations in my  ancestry.com search and found a likely candidate. I discovered an Axel Peter Nelson, born on the same day as Mary’s brother Per, January 23, 1862, from Sweden. 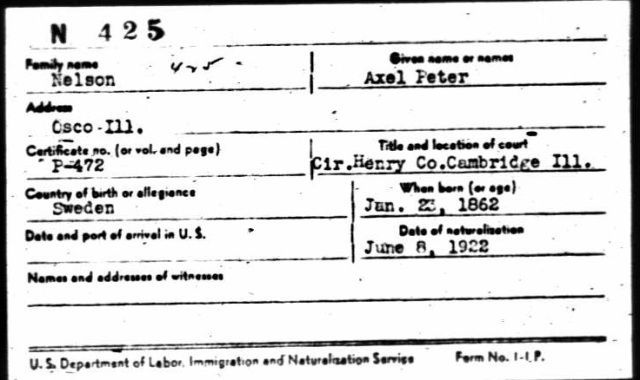 Axel and Per both immigrated to North America in April 1888. Axel Peter Nelson, a farmer, settled in Osco, Illinois. At age 45 he married Teda Skoog, a Swedish immigrant. Since Axel Peter and Teda had no children, I can’t incorporate a DNA search.  I could obtain Axel’s 1922 naturalization record, perhaps it can resolve if Per Nilsson and Axel Peter Nelson are the same person.[ix]

One more element that complicated my research was Mary’s  birthdate. A family bible[x], census records, and a death certificate noted Mary’s birthdate as August 31, 1856.

According to Swedish parish church records, Mary was born August 31, 1854.[xi] She shaved two years off of her age to appear younger. She wanted her husband, John Nichols, to believe she was only six months older than him.

(Växvik is the correct spelling for a small village near Skällarbyn where Mary may have worked prior to her emigration.)

Thanks to my mother and her uncle Johnnie for jump starting the research that helped me solve the mystery of Mary’s origins in Sweden. 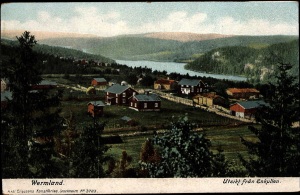 Finding Mary and her birth family in Skällarbyn, Köla Parish, Värmland, Sweden led to a flurry of book orders, research, and emails. I wanted to immerse myself in my immigrant ancestor’s story. Mary and her three siblings joined 1.25 million Swedish immigrants who were part of the great migration from Europe(1880-1920.) They left all that was familiar to them, knowing that they might never see their families again. Their journey to America would change their lives forever.

An interest in history and travel lends itself to a passion for genealogy. The more I research, the more I realize there is to discover. It is a never-ending puzzle.
View all posts by treeklimber →
This entry was posted in Biographies, My Family Ancestry and tagged Hyde, Nelson, Nichols, Nilsdotter, Olsdotter, Persson. Bookmark the permalink.

10 Responses to THE MYSTERY OF MARY NELSON/ MARIA NILSDOTTER: CASE SOLVED Part I