THOMAS A. NICHOLS – Part X – THE MYSTERY OF LILLIE BULL 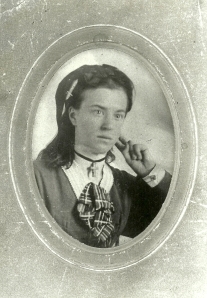 Three years ago, during my first Thomas Nichols fact-finding trip to the National Archives, I thought Thomas had disappeared from the Civil War records.  The Civil War pension register identified a Thomas A. Nichols with three children, Mary, Florence and Howard Nichols.  However, the Thomas I knew had three children named John, Bertha and Charles.  Who was Thomas A. Nichols, father of Mary, Florence and Howard, and who was the mother?  A few months later, a distant relative of my Thomas’ son Charles Nichols, contacted me and said Thomas A. Nichols had married twice, but didn’t know the name of his second wife!  Back I went to the pension records…..there again was  Thomas A. Nichols, and his children Mary, Florence, Howard and the comment “orphans”!  Who was their mother?  It wasn’t Helena, she had died! Thomas had a second wife! Who?

After a research trip to Pottsville, PA, the story unfolded. I found a marriage record, and sadly, an obituary for a Lillian (Lillie) Bull Nichols. Only 8 years after Thomas and Lillie married, Lillie passed away leaving 3 young children and an older husband. 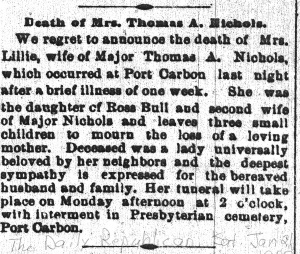 Death of Mrs. Thomas A. Nichols

We regret to announce the death of Mrs. Lillie, wife of Major Thomas A. Nichols, which occurred at Port Carbon last night after a brief illness of one week. She was the daughter of Ross Bull and second wife of Major Nichols and leaves three small children to mourn the loss of a loving mother. Deceased was a lady universally beloved by her neighbors and the deepest sympathy is expressed for the bereaved husband and family. Her funeral will take place on Monday afternoon at 2 o’clock, with interment in Presbyterian cemetery, Port Carbon.

Within 13 years Thomas had buried two wives and each left 3 children behind to mourn them. Thomas at 63 was left to care for children aged 6, 4 and 3. His eldest daughter, Bertha, from his first marriage,  had married in 1886 and moved to Trenton N.J. . Did Thomas rely on Lillie’s younger sister Mary to help him? He must have turned to family or neighbors to help care for the children.

Curiously, on the same day that Lillie died, 20 January 1888, Thomas had all of his 3 youngest children baptized at the First United Methodist Church in Port Carbon, PA. Did Lillie ask this while she lay on her death-bed? Did Thomas fear for his children’s souls with death stealing both of his wives at a young age?

Baptismal Record for Mary, Florence and Howard Nichols. Courtesy of Historical Society of PA and ancestry.com

It wasn’t long before death struck the Nichols family again. Only 7 years after Lillie passed away, Thomas A. Nichols died. He was 70 years old. When PA death certificates became available online this year, I found one for Thomas. After 3 decades of suffering from his Civil War wounds, Thomas ultimately died from an infection. His cause of death was Nephritis (inflammation of the kidneys). How long he was hospitalized is not noted.  His case must have been severe as he went to the university hospital in Philadelphia. 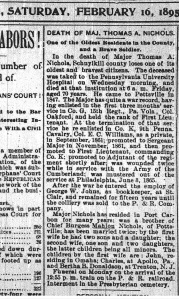 DEATH OF MAJ THOMAS A. NICHOLS

One of the Oldest Residents in the County, and a Brave Soldier

In the death of Major Thomas A. Nichols, Schuylkill county loses one of its oldest and bravest citizens. The deceased was taken to the Pennsylvania University Hospital on Wednesday morning, and died at that institution at 6 a.m. Friday, aged 70 years. He came to Pottsville in 1847. The Major has quite a war record, having enlisted in the first three months’ service in Co. G. 15th Regt., Pa. Vols, Col, Col Oakford, and held the rank of First Lieutenant. At the termination of that service e he re enlisted in Co. K; promoted to Adjutant of the regiment shortly after was wounded twice while in service with the Army of the Cumberland; was mustered out of the service Philadelphia, June 8, 1865.

After the war he entered the employ of George W. Johns, as bookkeeper, at St. Clair, and remained for fifteen years until the colliery was sold to the P.& R. Company.

Major Nichols has resided in Port Carbon for many years; was a brother of Chief Burgess Mahlon Nichols, of Pottsville; has been married twice; by the first wife he had two sons and a daughter; the second wife, one son and two daughters; the latter children being all minors. The children by the first wife are: John, residing in Omaha; Charles at Apollo, Pa., and Bertha B. Donaldson, at Trenton, N.J.

Funeral on Monday on the arrival of the 12:55 p.m. train on the P.& R. railroad. Interment in the Presbyterian cemetery. 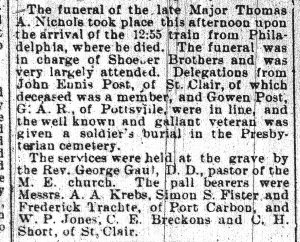 The funeral of the late Major Thomas A. Nichols took place this afternoon upon the arrival of the 12:55 train from Philadelphia, where he died. The funeral was in charge of Shoeder Brothers and was very largely attended. Delegations from John Ennis Post, of St. Clair, of which deceased was a member, and Gowen Post. G.A.R. of Pottsville, were in line, and the well known and gallant veteran was given a soldier’s burial in the Presbyterian cemetery.

The services were held at the grave by the Rev. George Gaut, D.D. pastor of the M.E. church. The pall bearers were Messrs. A.A. Krebs, Simon S. Fister, and Frederick Trachte, of Port Carbon, and W.P. Jones, C.E. Breckons and C.H. Short of St. Clair.

What a grand tribute for Thomas that he was given a soldier’s funeral and recognized by his comrades and community. He would have been proud.

What became of his orphaned children?

An interest in history and travel lends itself to a passion for genealogy. The more I research, the more I realize there is to discover. It is a never-ending puzzle.
View all posts by treeklimber →
This entry was posted in Biographies, My Family Ancestry, Obituaries and tagged Bull, Nichols. Bookmark the permalink.